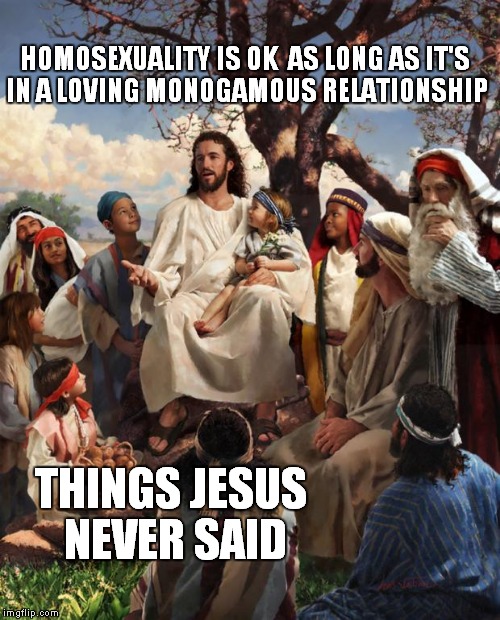 Several proponents of the movement to try to make homosexuality compatible with scripture have often claimed that "Jesus did not say anything about homosexuality, therefore it's not something we should forbid in the New Covenant." Is this true? Did Jesus give a free pass on the sin of homosexuality? I would like to start by saying that this approach is both deceptive regarding the teachings of Jesus in His ministry and completely misrepresentative of the doctrine of the scripture's infallibility.

"‘For this reason a man shall leave his father and mother and be joined to his wife, and the two shall become one flesh.’ So they are no longer two but one flesh. What therefore God has joined together, let no man put asunder" (Mark 10:5-9)"

We also find Jesus explicitly condemning all forms of sexual immorality after His resurrection when He spoke to the Apostle John in the book of Revelation:

Revelation 2:20-"But I have this against you, that you tolerate that woman Jezebel, who calls herself a prophetess and is teaching and seducing my servants to practice sexual immorality and to eat food sacrificed to idols."

In Revelation 1:17-18 Jesus appeared to the Apostle John and began giving him directives regarding what to write to the churches in that present time, when Jesus began to address the church at Thyatira He directly condemned sexuality immorality. Sexual immorality is defined very clearly in the Bible as adultery, homosexuality, fornication, bestiality, and all other forms of sexuality outside of heterosexual marriage. Simply put, Jesus not only condemned homosexuality in Revelation 2:20, He also condemned all other forms of sexual relations outside of Biblical marriage.

Whoever started this "rumor" that Jesus never said anything about homosexuality is either ignorant or flat out lying in order to promote a personal agenda within the Christian world. It denies the areas in scripture where Jesus does address it, and it also undermines the reality that the entire Bible is inspired by God, not just the parts referring to Jesus' earthly ministry. The New Testament is comprised of every inspired writing that the early church included in it's Holy Scriptures, the canonization of these texts were simply the affirmation of inspired writings that were already universally affirmed by the early church. Among these Holy Scriptures that we now call the Bible are numerous verses condemning homosexuality:

Romans 1:26-27-"For this reason God gave them up to dishonorable passions. For their women exchanged natural relations for those that are contrary to nature; and the men likewise gave up natural relations with women and were consumed with passion for one another, men committing shameless acts with men and receiving in themselves the due penalty for their error."

Galatians 5:19- " Now the works of the flesh are evident: sexual immorality, impurity, sensuality,"

These are just a few of the scriptures in the Bible that clearly prohibit homosexuality as it does other sin. My reason for writing the article is not to express a harsh, mean spirited attitude toward gay people. My reason is to address the deceptive rumor that is floating around the internet which claims that Jesus never dealt with the topic, He did. For more information about the homosexual issue CLICK HERE.