Did overturning Roe v. Wade impose religious beliefs on the masses? A refutation. 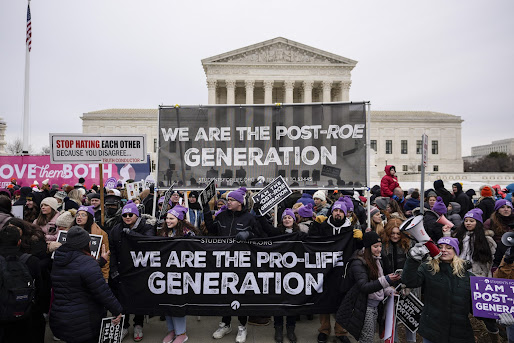 SEE "What does the Bible say about abortion?" By Clicking HERE.

Abortioneers argue that the overturning of Roe v. Wade imposes religious tyranny on the masses forcing women to have babies in the name of religion. Is this true?

Legal- The actual guilty party on the issue of “forcing beliefs on everyone” are the progressive Justices who instituted Roe v. Wade. The overturning of Roe v. Wade dismantled a judicial ruling that invented the right for an entire class of human beings, namely unborn babies, to be freely killed without any repercussions. Roe v. Wade was a government sanctioned murderous assault on the unborn that led to the killing of 67 million human beings without any legal consequences. The pro-lifers like myself who fought against Roe v. Wade were fighting for the abolition of one of the longest standing discriminatory judicial rulings in American history. Therefore, in reality the overturning of Roe v. Wade was an act of war on the tyranny of Roe v. Wade against humans in the womb, not an act of imposing tyranny upon women's rights.

Furthermore, because Roe has been overturned the issue is now going to be decided at the state level and voters now possess more of a voice on how the issue of abortion is handled in their state. Up to this point Liberals used “the loophole of the Supreme Court” to legislate it’s abortioneer ideology from the bench rather than in accordance with the will of the voters as a whole. If Liberals truly believe their polls that most of the country supports abortion then they should have no fear of the future, they should be displaying great confidence that the voters will address this matter and institute “abortion rights” at the legislative level. But they know their polls are fake and that’s why they are panicking, the voters will not be voting for unborn babies to be killed en masse any time soon.

Moral- All legislation that seeks to criminalize certain behavior is inherently dealing within the realm of morality. Framing abortion as a purely religious question is illogical because it would be similar to framing all crime as a purely religious question- for example we have criminalized things like murder, theft, robbery, and assault without anyone claiming that the criminalization of these things “impose religion on the masses.” Therefore if abortioneers want to say that criminalizing the killing of the unborn is an inherently religious matter then they need to be consistent across the board with their claim and argue that all criminalized behavior is done out of a religious motive. Everyone knows this is not the case.

There are plenty of people who simply believe abortion is wrong without appealing to the Bible or to religious morality. In addition to this, claiming that women have a right to do what they want with their body as a way of saying “killing unborn human beings is not immoral” is itself immoral, as well as totally misleading. Nobody will object to the right to do as you wish with your body, and that’s why liberals use this rhetoric to cloak the real issue in emotional argumentation, but to equate bodily autonomy to the right to assault the bodily autonomy of an unborn child is absolutely unacceptable in every possible way. Arguing that bodily autonomy is only protected when you are outside of a womb is the very thing that led to the death of 67 million human beings inside the wombs of their mothers. This is not a trivial matter. The morality of protecting all human life transcends every religious construct and ideological argument that can be made.

Societal- The culture of abortion has harmed the current and future well being of our country in a way that is nearly incalculable. It is a well known fact that if your country does not have a robust fertility rate, your country will cease to exist. Many countries are looking at the decrease in birth rates and the forecasts that project a “population bottleneck” and they are in great distress. This will create problems for the funding of social programs for the elderly, heavier taxation for those who are young and able bodied, worldwide economic destabilization including multiple recessions and depressions in various places, as well as deep vulnerabilities to the national security of countries with a declining population.

The culture of abortion has also created a sentiment of apathy toward the intrinsic dignity and worth of human beings as a whole. Our modern world is full of people who treat one another with bitter contempt, outright disdain, hatred and violence. The callousness of human beings toward one another cannot possibly be improved in the context of a culture that kills their unborn babies without so much as batting an eye. Unless we work to restore the dignity of human beings of every kind, especially humans in the womb who are the most vulnerable of them all, we cannot expect the callousness and violence in our modern society to improve in any way whatsoever.

Important note- This article is not intended to bring shame and condemnation to women who have had an abortion and regret the matter. Jesus Christ offers forgiveness to everyone who puts their faith in His sacrifice on the Cross. If you've had an abortion before and you want to be forgiven and reconciled to God you can read THIS ARTICLE. God loves you, I pray His love is revealed afresh to you as you draw near to Him by faith!