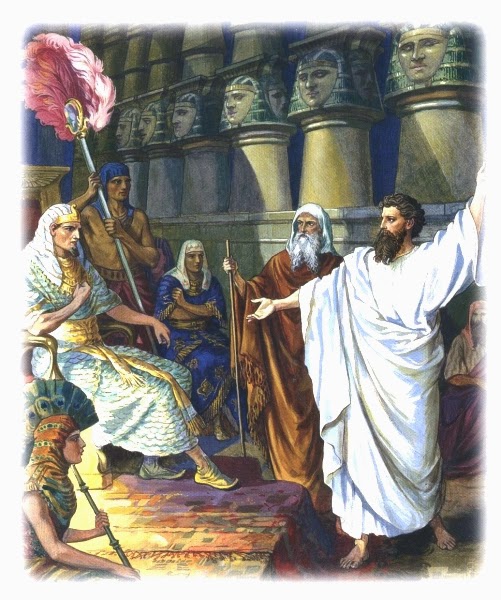 The question of whether Pharaoh hardened his own heart or if God was the one who hardened it has been discussed for centuries in the Christian world. The answer to this question is simple, but it calls for a thorough review of the scriptures which address it. In scripture we find places where it tells us "Pharaoh  hardened his heart" and other places where it tells us "God hardened Pharaoh's heart." So the simple answer to this question is, "both Pharaoh and God played a role in the process." In this article I will seek to unravel the way that this process happened and how it testifies to God's patience and sovereignty as well as the free will that He has given to us as human beings.

Let's begin with looking Chronologically at the hardening of Pharaoh's heart:

1.) Exodus 7:13- "Yet Pharaoh's heart became hard and he would not listen to them, just as the LORD had said."

2.) Exodus 8:15- "But when Pharaoh saw that there was relief, he hardened his heart and would not listen to Moses and Aaron, just as the Lord had said."

3.) Exodus 8:32- "But this time also Pharaoh hardened his heart and would not let the people go."

4.) Exodus 9:12- "But the Lord hardened Pharaoh’s heart and he would not listen to Moses and Aaron, just as the Lord had said to Moses."

5.) Exodus 9:34- "When Pharaoh saw that the rain and hail and thunder had stopped, he sinned again: He and his officials hardened their hearts."

6.) Exodus 10:1- Then the Lord said to Moses, “Go to Pharaoh, for I have hardened his heart and the hearts of his officials so that I may perform these signs of mine among them."

9.) Exodus 11:10- "Moses and Aaron performed all these wonders before Pharaoh, but the Lord hardened Pharaoh’s heart, and he would not let the Israelites go out of his country."

10.) Exodus 14:4- "And I will harden Pharaoh’s heart, and he will pursue them. But I will gain glory for myself through Pharaoh and all his army, and the Egyptians will know that I am the Lord.” So the Israelites did this."

11.) Exodus 14:8- "The Lord hardened the heart of Pharaoh king of Egypt, so that he pursued the Israelites, who were marching out boldly."

12.) Exodus 14:17- "I will harden the hearts of the Egyptians so that they will go in after them. And I will gain glory through Pharaoh and all his army, through his chariots and his horsemen."

So we see 3 distinct instances (2. 3. & 5.) where the Bible clearly indicates that Pharaoh hardened his own heart out of his own autonomous choice. We also see 6 distinct instances (4. 6. 7. 8. 9. & 11.) where the Bible says that God hardened Pharaoh's heart, one of which correlates to the #5 occurrence which says Pharaoh and his officials hardened their own hearts.  So which is it? Did God harden Pharaoh or did Pharaoh harden his own heart? I think the correlation between occurrence #5 & #6 gives us some insight.

5.) Exodus 9:34- "When Pharaoh saw that the rain and hail and thunder had stopped, he sinned again: He and his officials hardened their hearts."

6.) Exodus 10:1- Then the Lord said to Moses, “Go to Pharaoh, for I have hardened his heart and the hearts of his officials so that I may perform these signs of mine among them."

So although from a technical aspect we understand from occurrence #4 that Pharaoh and his officials decided to rebel, God in occurrence #5 admits that His sovereignty played a part in the process. Now we know from scripture that God does not cause sin or evil to happen (James 1:13), so how is it that He played a role in hardening these men so that they sinned? The answer is that God "indirectly hardened them." That is, God foreknew that because of their sinful disposition they would respond to His righteous judgments with hardness. So the phrase "God hardened them" refers to God sending judgment with the knowledge of how they would respond, yet sending it anyway. Even the prophet Samuel admits that Pharaoh was the one who ultimately hardened his own heart:

1 Samuel 6:6-"Why should you harden your hearts as the Egyptians and Pharaoh hardened their hearts? After he had dealt severely with them, did they not send the people away, and they departed?"

Does this mean that God was wrong to send judgement upon Pharaoh in such a way that he knew Pharaoh would respond with hardness of heart? Absolutely not. If you notice that Pharaoh initially set into motion the process of hardening by doing so of his own accord in occurrence #1, #2 & #3 we can realize that judgement was appropriate for this man who willfully disobeyed God. Thus the subsequent hardenings  in occurrences #3-#11 were the snowball effect (spiritual consequences) of Pharaoh's initial prideful disposition (Proverbs 16:18). Although God knew this all in advance Pharaoh was capable of repentance from the beginning (see Ezekiel 18:23). The unfathomable wisdom in this entire ordeal is that God was able to take the righteous judgement of a willfully sinful man and use it to display His glory and power to all who lived in Egypt (Exodus 14:4).

We see Paul explaining this process of spiritual consequence and the "snowball effect" of rebellion in Romans chapter 1:

Romans 1:21-24- "For although they knew God, they neither glorified him as God nor gave thanks to him, but their thinking became futile and their foolish hearts were darkened. 22 Although they claimed to be wise, they became fools 23 and exchanged the glory of the immortal God for images made to look like a mortal human being and birds and animals and reptiles.
24 Therefore God gave them over in the sinful desires of their hearts.

Pharaoh initially chose to rebel against God. After a window of time to repent God decided to give Pharaoh over to his hardness as a spiritual consequence to his actions. God has worked this way throughout the whole of scripture. He is "compassionate and gracious, slow to anger, abounding in love (Psalm 103:8). He "strived with men" in the days of Noah (Genesis 6:3), being patient with them as the Ark was being built, even using Noah to preach to them (2 Peter 2:5). But after they had reached a point of "no return" (Genesis 6:5) He sent the flood as righteous judgement for their actions.

God does not directly harden anybody so as to cause them to sin (James 1:13). But He does hand people who are already willfully rebellious over to their sin as a spiritual judgement for their actions (Romans 1). This was the case with Pharaoh, and it is also the case with many today. God is long suffering toward us, calling us all to repent. But once we reach the breaking point demonstrating no willingness to respond to God when He calls, He hands us over to our wickedness and allows for us to be tangled in our own mess.