One of the most popular questions about the Christian faith is "what is the trinity?" The concept of God being three and one at the same time is nothing short of mind-boggling. For those who are considering Christianity it often can cause them to walk away confused. Before we talk about what the Trinity IS, we need to dispel some common myths and bad teachings that float around about the trinity.

Some people in a well-meaning attempt to help others understand the trinity in a simple manner will often use the following analogy. I'm a father, I'm a son, and I am a brother all at the same time ... It's the same way with God he's the Father, the Son, and the Holy Spirit all at the same time. However this is not the Biblical teaching of the Trinity... This is actually connected with a heretical teaching called trinitarian modalism. Essentially it teaches that there is one God who operates in three different modes, which is not taught anywhere in the Bible.

So what is the Trinity? Biblically speaking the word Trinity is not used in the Bible however it is a word that has been formulated within theological circles throughout church history in order to describe a clear teaching about God that is found in the Bible. The doctrine of the Trinity states plainly that there is one God in three separate persons, and they are in complete unity with one another in purpose, nature, and essence. Confusing right? Many people respond to this teaching saying, isn't this polytheism not monotheism?

Well let's take a look at the history of the word "one" in the Bible. Biblical monotheism is founded upon Deuteronomy 6:4- ““Hear, O Israel: The LORD our God, the LORD is one.” But was this the first place that this word "one" is used in the Bible?Taking a closer look we find the word “one” used in the Bible is in Genesis 1:5- “And there was evening and there was morning, the first day (yom echad)”. It describes two separate things, in this case evening and morning, coming together as one. The second time this word is used in the Bible is to describe the union of Adam and Eve in Genesis 2:24- “For this reason a man shall leave his father and his mother, and be joined to his wife; and they shall become one flesh.” So, simular to Genesis 1:5 we see the Hebrew word “Echad” used to describe two persons becoming “one.”

So biblically speaking the word used to describe God as "one" in the Bible is a word used in its first occurrences in Scripture to describe two things or persons coming together in Union. So as far as we describe God as "one" this is what we mean when describing the father Son and the Holy Spirit as One God. Although there are three separate persons they are in complete Union, Unity, and perfect harmony with one another, they are, as a whole, the God of the Bible. Some theologians like to describe this mystery as God being “complex” in his Unity. 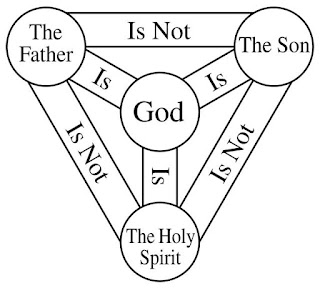 Take a look at the above chart for a visual reference. The Father is not the Son, but the Father is God, the Son is not the Holy Spirit, but the Son is God, the Holy Spirit is not the Father, but the Holy Spirit is God. A proper teaching of the Biblical Trinity is meant to cause one to walk away scratching their head. However shouldn’t we should expect such phenomenons when studying and learning about a God who created the universe with the word of his mouth and sustains the entire universe by the power of His might? A proper approach to Biblical learning is one that realizes there will be many things that we cannot fully comprehend about our great God who created this incredibly complex universe that we live in.

Some will say "isn't that Trinity stuff simply a New testament Teaching?" Doesn't the Old Testament teach strict monotheism? Well, if we go back to the beginning of Genesis as God Was preparing to create mankind is says in Genesis 1:26- “Then God said, “Let us make mankind in our image, in our likeness.” Some have proposed that this was God speaking to the angels, however mankind is not created in the image of angels nor is there any evidence of angels having creative power like God. So as early as we see in the Biblical narrative we find the God-head which is ultimately revealed as the Father, Son and the Holy Spirit having a conversation with one another about creating mankind. We also, as mentioned earlier, know that the word for “one” can be used in a plural sense. As well as we find what are called theophanies in the Old Testament in which God appears in human form to characters like Abraham and Jacob in Genesis chapter 18 and 32. This is consistent with the reality of the Trinity in which God the Son can appear in human form to characters in the Old Testament while God the Father remained enthroned in heaven, at the same time God the Holy Spirit filled the universe with His presence.

The Doctrine of the Trinity in the Bible is meant to inspire reverence toward God in our hearts. Often times in our desire to achieve complete logical conclusions to every pursuit of learning we miss the point that the Bible is often trying to emphasize... That the God Who created the Universe is a God who in many ways is incomprehensible. Any God that can be reduced to be fully understood by the human mind is a God who is no God at all. The God of the Bible is worthy of all worship and truly fits what one should expect from a transcendent, all-knowing, all-powerful Being who spoke the entire universe into existence.

March 19, 2020
For the video version of this article click here:  https://www.youtube.com/watch?v=bqJevPWIxGU The recent COVID-19 outbreak has brought our attention to the unavoidable reality of plague that has frequently been a part of human history. Starting in Wuhan China COVID-19 spread rapidly throughout every major continent in the world leading to panic buying, government mandated quarantines, social distancing, and higher awareness of hygiene practices. With the Center for Disease Control in the United States issuing guidelines asking for gatherings of no more than 10 people to be cancelled, churches across the nation have wondered what God is calling them to do in response.  As with many events in the modern world it’s important to let history be our ultimate teacher in this regard. We need to take a close look at how the Christian church has responded to plague and outbreak throughout history and learn from what they did, both good and bad. The amazing reality that we begin t
Post a Comment
Read more