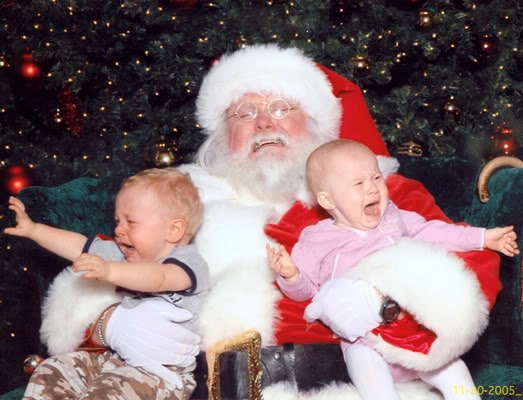 "A wink of his eye, and a twist of his head, soon led me to know I had nothing to dread."-Twas' the Night Before Christmas, Clement C. Moore


As a kid I was taught that Santa Claus was going to bring me the presents I wished for on Christmas morning. I watched movies and cartoons about Santa riding his sleigh with gifts to give to all of the children around the world. Some of the stories depicted Santa as giving coal to bad kids and toys to good kids and I was told jokingly by my parents that I would "receive coal if I was bad," but it was never made to be a serious threat. Up until around the age of seven I really believed that Santa magically came down the chimney and left presents for my brothers and I, and it never caused me to have any resentment toward my parents for telling me he was real. I saw it as my parents wanting to give me a fun Christmas adventure, a magical experience that my brothers and I could use our imagination with. As I learned that Santa was not real, I still pretended he would come each year just to have fun with the tradition, I learned that ultimately Christmas was about Jesus.


As I became an adult and had three sons of my own I began to ask myself what I should tell my children about Santa Claus. After all, the memories of believing in him were fond and magical for my own childhood. I decided to be honest with my kids about who Saint Nicholas is, a generous man who died long ago. Knowing how fun it was to expect gifts from Santa Claus on Christmas morning I also decided to allow my kids to "pretend" he was real. I explained that Santa is not alive anymore but we can still believe in him for fun. This gives them a chance to use their imagination and enjoy the suspense of going to sleep awaiting presents on Christmas Eve. I may joke around about Santa bringing my kids coal if they are bad but it's all in fun, I make sure they don't take me seriously and they ultimately will know the gifts came from Mom and Dad. As of now I have an oldest son of six, a younger son of two, and a youngest son of one. My oldest son already knows that Santa is not real but pretends he is for fun, my two year old isn't old enough to explain Santa to yet so he just believes in Santa for the moment, and of course my youngest son is just having fun pulling ornaments off of the Christmas tree and unplugging the Christmas lights from time to time, so we'll talk to him about Santa later.


One point I would make to start would be the issue of allowing Christmas to become all about Santa. I think we are missing out on a powerful opportunity to teach our children reverence for Jesus if we allow our Christmas to be centered primarily on Santa, Rudolph, Frosty and the others. A good question to ask ourselves around Christmas time is "how often have I mentioned the birth of Christ over Santa this Christmas?" It may be prudent to have a special tradition of some sort in which you share the story of Christ's birth with your children during the Christmas season, and echo that sentiment throughout the weeks leading into Christmas. Each year we visit a local nativity scene and take time to tell our kids (mostly my oldest son, and my two year old) what Christmas is really about. I make it a point to differentiate between the "cartoon nature" of Santa, Frosty, and the others, and the reality of Jesus Christ who is God in the flesh and has literally been resurrected from the dead. If we make it a point to do this early on it will be beneficial in guarding our children from placing Jesus in the "cartoon category" as the others are. We want them to know that God is real and He is actively pursuing their obedience and faith throughout life.


An interesting thing you can do regarding Santa Claus is to explain who Saint Nicholas really is. According to most historical traditions, Saint Nicholas was a man who lived sometime between 300-400 a.d. He was renowned for being a cheerful giver. According to tradition Saint Nicholas lost his parents at a very young age and he received a large inheritance. Instead of using the money for his own selfish interests he was said to have bought many gifts for children around his community. There is also a very moving tale surrounding one occurrence of generosity in which Saint Nicholas is purported to have paid the wedding dowry for a few women who were facing the possibility of being sold into slavery if they we unable to raise the funds. Knowing this, it is easy to see the reason why the Catholic Church canonized Nicholas as a "saint" (although Biblically we are all "Saints" through trusting the work of Christ on the Cross). Over time the mythology of what many believe to be Germanic and Dutch folklore began to be weaved into the story of Saint Nicholas. This is where the magical aspects of the story such as Santa "coming down the chimney," "traveling through the sky," "being assisted by multiple elves to build toys," etc. came from. For more information on the development of our modern Santa tradition visit: http://pastormark.tv/2011/12/21/who-was-saint-nicholas


Many Christian bloggers have gone to great lengths to demonize Santa and speculate as to why Santa should be "exorcised" from society as a pagan folklore invented by godless heathen. They argue that Santa is stealing glory from the Lord during the Christmas season, and in many respects that may be true, but demonizing him will not cause people to disown him. I would like to take another approach. Perhaps we should tell the real story, a story of a generous man who is believed to be a Christian from the early 300's. The truth will set us free, speculating as to whether Santa is of demonic origin will not. Most people realize that 99.9% of Americans who follow the Santa Claus tradition do not do so to affirm the beliefs of ancient pagan societies, even if some of the aspects of our modern Santa figure bears similarity to some pagan myths. If anything, Santa can prove to be a distraction to the real meaning of Christmas if we are not careful, which is Christ and His generosity. Giving is founded upon the greatest gift ever given in all of history, which is Christ as the payment for our sins. It would be wise to draw the parallel between the giving nature of the historical Saint Nicholas, and the source from which people are inspired to be generous. That source is our wonderful Father God who gave His only begotten Son so that whoever believes in Him will not perish, but will have eternal life (John 3:16).


So, is it ok to let your kids believe in Santa Claus? The answer is yes, Saint Nicolas was a real man! But should we teach our kids that Santa is still alive? No! It's always safer to be honest with your kids so that the foundation of trust is there for other things you tell them. Most kids do not resent their parents for telling them that Santa is real, but the principle of honesty will ensure that resentment is off the table for good, and from a Christian perspective we are to avoid lying in order to exemplify Christ who never lied. The real Saint Nicholas is an example of what we should do with the possessions that God gives us. Saint Nicholas prioritized giving to others who had less than he did, and that attitude resembles God. Is it bad that your kids want to use their imagination to have fun at Christmas time? No! But let's be careful to instill the true meaning of Christmas, making the reality of Christ of utmost importance. Is it bad for our kids to watch Santa Claus movies or movies about other Christmas characters? No! But let's make sure that we incorporate movies and stories that instill the reality of Jesus into the hearts and minds of our children. We need to explain that Jesus is not a cartoon; He is the One true God who loves them dearly, and Santa is a holiday traditon based around a man who died long ago. Jesus is alive and He interacts with us in a tangible way! He pours out His love in our hearts by the Holy Spirit! He redeems us from sin, He gives us both material and spiritual gifts, He gives us wisdom in life, He gives us hope, joy,  life, love and so much more! Santa isn't a threat if we learn to tell the real story about Saint Nick's generousity, but Santa becomes even less of an issue if we prioritize the realest story, the story of Jesus, our God, King, Savior, and Friend. God bless, and have a very Merry Christmas!