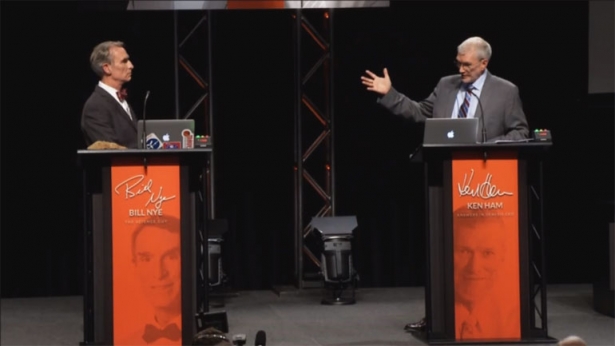 The creation vs. evolution debate that took place Tuesday February 4th, 2014 at 7:00 p.m. between Bill Nye and Ken Ham was fascinating. I was pleased to see both sides state their concerns about their opponent’s view very clearly and respectfully.  This type of debate is healthy for our society in that it allows two popular scientific viewpoints to present their case on a public platform for people to make an informed opinion.

I am a strong proponent of creationism because the Bible is factually true and scientifically accurate. The Bible is the most scrutinized book in the history of mankind and it has yet to be disproven by anyone. I am writing this article to address some of the topics of concern that Bill Nye addressed and provide resources to clarify these concerns both Biblically and scientifically. The more we understand that God’s word agrees with God’s world, the more we are able to live our lives in bold faith and pursuit of making disciples of all men.

The first concern I want to address is the assertion that it would be very difficult to fit and care for pairs of 7,000 kinds of animals on the Noah’s Ark. First of all, recent scientific discoveries in the Christian Science community have narrowed down the major “kinds” of animals to between 2,000-3,000, not 7,000. This would mean that about 4,000-6,000 animals occupied the Ark. I want to provide a valuable and very detailed resource article written by John Woodmorappe (B.A. and M.A. in Geology and a B.A. in Biology) to address the particulars of this concern. http://www.answersingenesis.org/articles/nab3/how-could-animals-fit-on-ark

The next issue related to Noah’s Ark that Bill Nye brought up was, “how did millions of species arise from a few thousand “kinds” of animals on the Ark?” This question describes an immediate inaccuracy in relation to animals on the Ark. Bill fails to realize that only land vertebrates occupied the Ark. Of the land vertebrates, there are only around 33,000 named living “species” (and a few thousand more fossil species). These are divided into fewer than 10,000 genera and 1,000 families. In relation to this subject Dr. Marcus Ross has underwent very valuable documented research. He is the assistant professor of geology and assistant director for the Center for Creation Studies at Liberty University. He holds a Master’s Degree in Paleontology and a PhD in Geosciences from the University of Rhode Island. In this article he very easily explains the “kinds” & “species” dilemma.http://www.answersingenesis.org/articles/am/v8/n1/no-kind-left-behind

Another part of Bill Nye’s argument against Biblical integrity was that the “order in the geological column” is evidence for billions of years. Bill also asserted that radiometric dating was a viable method for dating rocks and bones at millions of years old. There is, in fact a fairly consistent order found in the fossil record, but this vague order also contains quite a large quantity of random placement of various fossils. There also have been no verifiable transitional fossils found in the geological column (if evolution has been happening for millions of years, there should be hundreds of thousands if not millions of "transitional fossils"). Dr. Andrew Snelling PhD is one of several scientists who have documented work on the order in the geological column in relation to Noah’s flood and it accurately defends Biblical history. See: http://www.answersingenesis.org/articles/am/v5/n1/order-fossil-record#fnMark_1_2_1.  In regards to radio-metric dating scientists still have wildly sporadic & unpredictable results. Radio-metric dating is based on several very pivotal assumptions that cannot ever be proven or observed scientifically. The Institute for Creation Research recently had great levels of success in regard to clarifying the gross inaccuracy of radiometric dating. This article along with many others explains the problem with using radioisotopes to date fossils:  http://creation.com/radiometric-dating-and-old-ages-in-disarray

The last argument that I want to address which Bill Nye brought up several times during the debate (of which Ken Ham had already given him a detailed answer) is the argument that the creation science model is unable to make “scientific predictions.” As a matter of fact multiple predictions have been made and confirmed within the creation science model over the years and it continues to build tremendous momentum (it’s based on God’s Word!). Click this link to see a list of Creation Science Predictions:http://www.answersingenesis.org/get-answers/features/successful-predictions

Due to the length of these topics and the limited time given to Bill & Ken during the debate, none of these concerns were able to be adequately addressed in a lengthy explanation. I believe that the debate was done in such a way that neither Bill nor Ken can be deemed “the winner” because both stated their case with Excellency. However, I do believe this debate was a win for Christianity because it allowed us to have a public opportunity to give verifiable evidence which supports the truth of scripture, and over 3 million people tuned in! It’s important to understand that despite the recent “hype” surrounding evolution, God’s Word has yet to be disproven, and never will be. The heavens and the earth will pass away, but His word will last forever! (Luke 21:33)
Written by: Kyle Bailey (see links for additional reference material on this topic)